Did humans domesticate themselves? 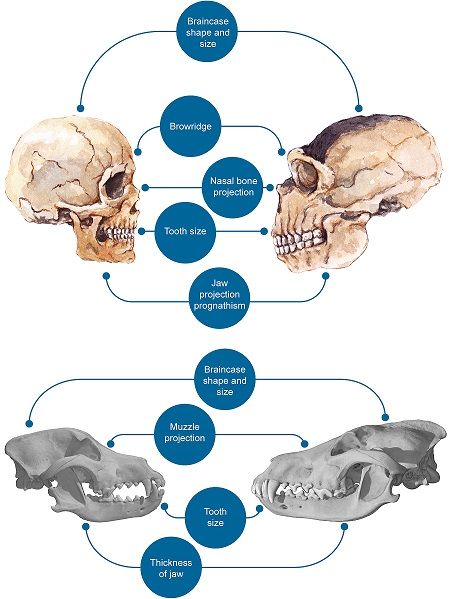 Human ‘self-domestication’ is a hypothesis that states that among the driving forces of human evolution, humans selected their companions depending on who had a more pro-social behavior. Researchers from a team of the UB led by Cedric Boeckx, ICREA professor at the Department of Catalan Philology and General Linguistics and member of the Institute of Complex Systems of the University of Barcelona (UBICS), found out new genetic evidence for this evolutionary process.

The study, published in the science journal PLOS ONE, compared the genomes of modern humans to those of several domesticated species and their wild animal type, in order to look for overlapping genes that were associated with domestication traits, such as docility or a gracile physiognomy. The results showed a statistically significant number of genes associated with domestication which overlapped between domestic animals and modern humans, but not with their wild equals, like Neanderthals.

According to the researchers, these results reinforce the human self-domestication hypothesis and “help to shed light on one aspect that makes us human, our social instinct”.

A new type of evidence: the genomes of extinct human relatives

Self-domestication would occur in species that display anatomical and behavioural features which are typical of domestic animals in comparison to their wild types. However, in these cases, domestication would have taken place without any other species domesticating the others. Several studies proposed the hypothesis stating that humans –and other species such as bonobos- domesticated themselves. The aim of this study was to find out biological evidence of the self-domestication by looking at a new type of data that has become available: the genomes of our extinct relatives, such as Neanderthals or Denisovans.

“One reason that made scientists claim that humans are self-domesticated lied within our behavior: modern humans are docile and tolerant, like domesticated species, our cooperative abilities and pro-social behaviour are key features of our modern cognition”, says Cedric Boeckx. “The second reason is that modern humans, when compared to Neanderthals, present a more gracile phenotype that resembles the one seen in domesticates when compared to their wild-type cousins,” added the expert.

To identify signs of a self-domestication process in humans, researchers made a list of genes associated with domestication features in humans, out of the comparison with the genome in Neanderthals and Denisovans, extinct human species. Then, they compared this list to the genome from some domesticated animals and their wild relatives, for instance, dogs compared to wolves, and cattle compared to wisents.

Results showed that this overlap was only relevant between domesticated species and humans. “Those modern humans’ selected genes under selection may prove central to a relevant process of domestication, given that these interactions may provide significant data on relevant phenotypic traits”, said Cedric.

Researchers also employed other statistical measures, including control species, to certify these results. Their aim was to rule out the fact that these genes could be randomly overlapped between humans and domesticated animals when compared, so they compared the genomes among other great apes. “We found that chimpanzees, orangutans and gorillas do not show a significant overlap of genes under positive selection with domesticates. Therefore, it seems there is a 'special' intersection between humans and domesticated species, and we take this to be evidence for self-domestication,” Boeckx said.

Researchers note that there is still more experimental work to do in order to find out the anatomical, cognitive and behavioural characteristics that are associated with these genes. “We suspect it will cover the anatomical, cognitive, and behavioral characteristics that researchers used to motivate the idea of self-domestication. We think that the overlap we found could help us explain our special mode of cognition and why we are strikingly cooperative, but this remains to be put to the test. In a sense, what we did is narrow down the set of genes to examine experimentally”, concluded Cedric Boeckx.

National Programme for the Promotion of Talent and Its Employability. National Sub-Programme for Incorporation  Ramón y Cajal (RYC) 2017

These grants are aimed at promoting the incorporation of national and foreign researchers with an outstanding career in R&D centers, by, on the one hand, the granting of aid for their employment, and, on the other hand, the granting of aid for the creation of permanent work posts for their subsequent incorporation into the agents of the Spanish Science, Technology and Innovation System beneficiaries of these aids.

The selection is based on a rigorous process of competitive competition of candidates based on their curricular merits and based on their ability to lead a line of research, based on scientific and professional experience as well as the independence of their career.

The Juan de la Cierva-Training helps to encourage the employment of young doctors for a period of two years in order to complete their postdoctoral research training in Spanish R&D centers other than those in which they carried out their work as predoctoral training. Candidates must meet the requirement of being a doctor and having obtained a doctorate between January 1, 2016 and December 31, 2017 for the general access shift, and between January 1, 2015 and December 31, 2017 for the access time for people with disabilities equal to or greater than 33 percent, except if they prove a cause of interruption according to the call

The Juan de la Cierva-incorporation grant aims to encourage the recruitment, by research organizations or Spanish R&D centers, of young doctors for a period of two years in order to strengthen the skills acquired during a first stage of postdoctoral training.