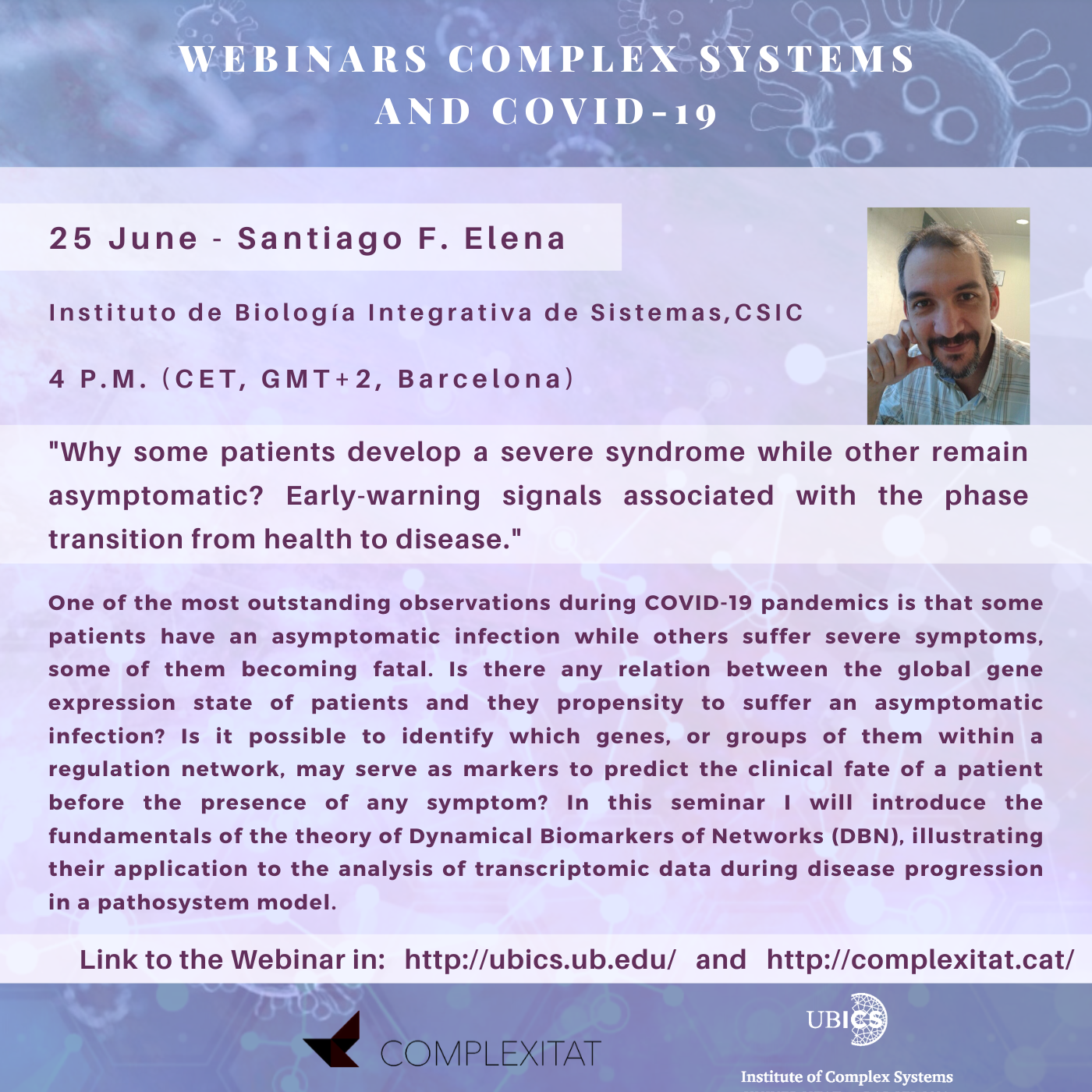 Title: "Why some patients develop a severe syndrome while other remain asymptomatic? Early-warning signals associated with the phase transition from health to disease."

You can see the webinar here: https://www.youtube.com/watch?v=IMY08wJQndU&list=PLf7A47_ENtnLkXJ8QPspRIT5a0zz-1nPd&index=6

Abstract: One of the most outstanding observations during COVID-19 pandemics is that some patients have an asymptomatic infection while others suffer severe symptoms, some of them becoming fatal. Is there any relation between the global gene expression state of patients and they propensity to suffer an asymptomatic infection? Is it possible to identify which genes, or groups of them within a regulation network, may serve as markers to predict the clinical fate of a patient before the presence of any symptom? In this seminar I will introduce the fundamentals of the theory of Dynamical Biomarkers of Networks (DBN), illustrating their application to the analysis of transcriptomic data during disease progression in a pathosystem model. 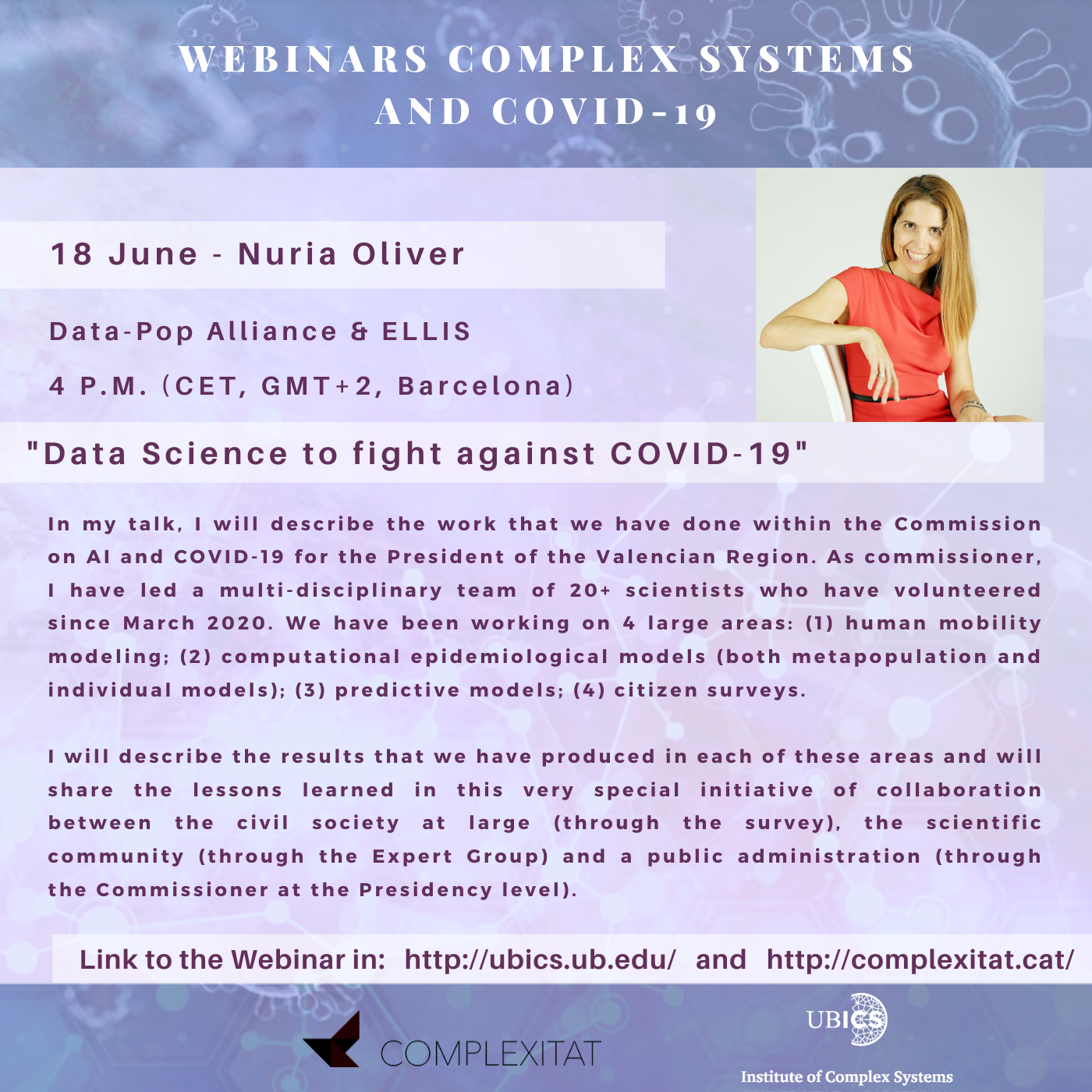 You can see the webinar here: https://www.youtube.com/watch?v=0C7PoVf2QNY&list=PLf7A47_ENtnLkXJ8QPspRIT5a0zz-1nPd&index=6&t=0s

In my talk, I will describe the work that we have done within the Commission on AI and COVID-19 for the President of the Valencian Region. As commissioner, I have led a multi-disciplinary team of 20+ scientists who have volunteered since March 2020. We have been working on 4 large areas: (1) human mobility modeling; (2) computational epidemiological models (both metapopulation and individual models); (3) predictive models; (4) citizen surveys (https://covid19impactsurvey.org)

I will describe the results that we have produced in each of these areas and will share the lessons learned in this very special initiative of collaboration between the civil society at large (through the survey), the scientific community (through the Expert Group) and a public administration (through the Commissioner at the Presidency level)

Nuria Oliver, is Chief Data Scientist at Data-Pop Alliance, Chief Scientific Advisor at the Vodafone Institute and co-founder of ELLIS (The European Laboratory for Learning and Intelligent Systems).  Since March 2020, she has been appointed Commissioner for the President of the Valencian Region on AI Strategy and Data Science applied to the fight against COVID-19. As part of her work as commissioner, she is leading a team of over 20 scientists working on large-scale human mobility modeling, computational epidemiological modeling and data science to answer public policy questions. As part of this work, she has launched the https://covid19impactsurvey.org, one of the largest anonymous citizens’ surveys to date related to COVID-19, with over 230,000 answers.

She is a Telecommunications Engineer from the UPM and holds a PhD in Artificial Intelligence from the Massachusetts Institute of Technology (MIT).

She has over 25 years of research experience in the areas of human behavior modeling and prediction from data and human-computer interaction. She has been a researcher at Microsoft Research (Redmond, WA), the first female Scientific Director at Telefonica R&D for over 8 years and the first Director of Research in Data Science at Vodafone globally (2017-2019).

Her work in the computational modeling of human behavior using Artificial Intelligence techniques, human-computer interaction, mobile computing and Big Data analysis - especially for the Social Good is well known with over 160 scientific publications that have received more than 17800 citationsand a ten best paper award nominations and awards. She is co-inventor of over 40 filed patents and she is a regular keynote speaker at international conferences.  Her work has contributed to the improvement of services, the creation of new services, the definition of business strategies and the creation of new companies.

Nuria is the only Spanish researcher recognized by the ACM as Distinguished Scientist (2015) and Fellow (2017) at the same time. She is also a Fellow of the IEEE (2017) and the European Association for Artificial Intelligence (2016). She has received an Honorary Doctorate from the Miguel Hernandez University (2018). Dr. Oliver is the youngest and fourth female member of the Spanish Royal Academy of Engineering (2018) and an elected member of the Academia Europaea (2016) and CHI Academy (2018), where she is the only Spanish scientist.

As an advisor, Dr. Oliver is a member of the scientific advisory committee of several European universities, the Gadea Ciencia Foundation, Mahindra Comviva and the Future Digital Society, among others. In addition, she advises the Government of the Valencia Community, Spain and the European Commission on issues related to Artificial Intelligence. She is a member of a Global Future Council at the World Economic Forum. She is an independent member of the board of Bankia.

Dr. Oliver's work has been recognized internationally with numerous awards. She graduated top of her class at the UPM and received the First National Telecommunications Award (1004). She is the first Spanish scientist to receive the MIT TR100 (today TR35) Young Innovator Award (2004) and the Rising Talent award by the Women’s Forum for the Economy and Society (2009). She has been awarded Data Scientist of the Year in Europe (2019), Engineer of the Year Award by the COIT (2018), the Medal for Business and Social Merit by the Valencian Government (2018), the European Digital Woman of the Year award (2016) and the Spanish National Computer Science Angela Robles Award (2016).

She has been named one of the top 11 Artificial Intelligence influencers worldwide by Pioneering Minds (2017), one of Spanish wonderful minds in technology by EL PAIS newspaper (2017), “an outstanding female director in technology” (El PAIS, 2012), one of “100 leaders for the future” (Capital, 2009) and one of the “40 youngsters who will mark the next millennium” (El PAIS, 1999).

Nuria firmly believes in the value of technology to improve the quality of people, both individually and collectively, and dedicates her professional life to achieving it.

Her passion is to improve people’s quality of life, both individually and collectively, through technology. She is also passionate about scientific outreach. Hence, she regularly collaborates with the media (press, radio, TV) and gives non-technical talks about science and technology to broad audiences, and particularly to teenagers, with a special interest on girls. She has given talks to more than 10,000 adolescents, has contributed to the book "Digital natives do not exist" (Deusto, 2017) with the chapter "Digital scholars", has written articles for EL PAIS, The Guardian, TechCrunch among others and has been co -organizer of large congresses with thousands of attendees, such as the first TEDxBarcelona event dedicated to emerging education, the I and II International Congress on Artificial Intelligence and the I International Congress on Aging. Her talks on WIRED, TEDx and similar events have been viewed thousands of times. 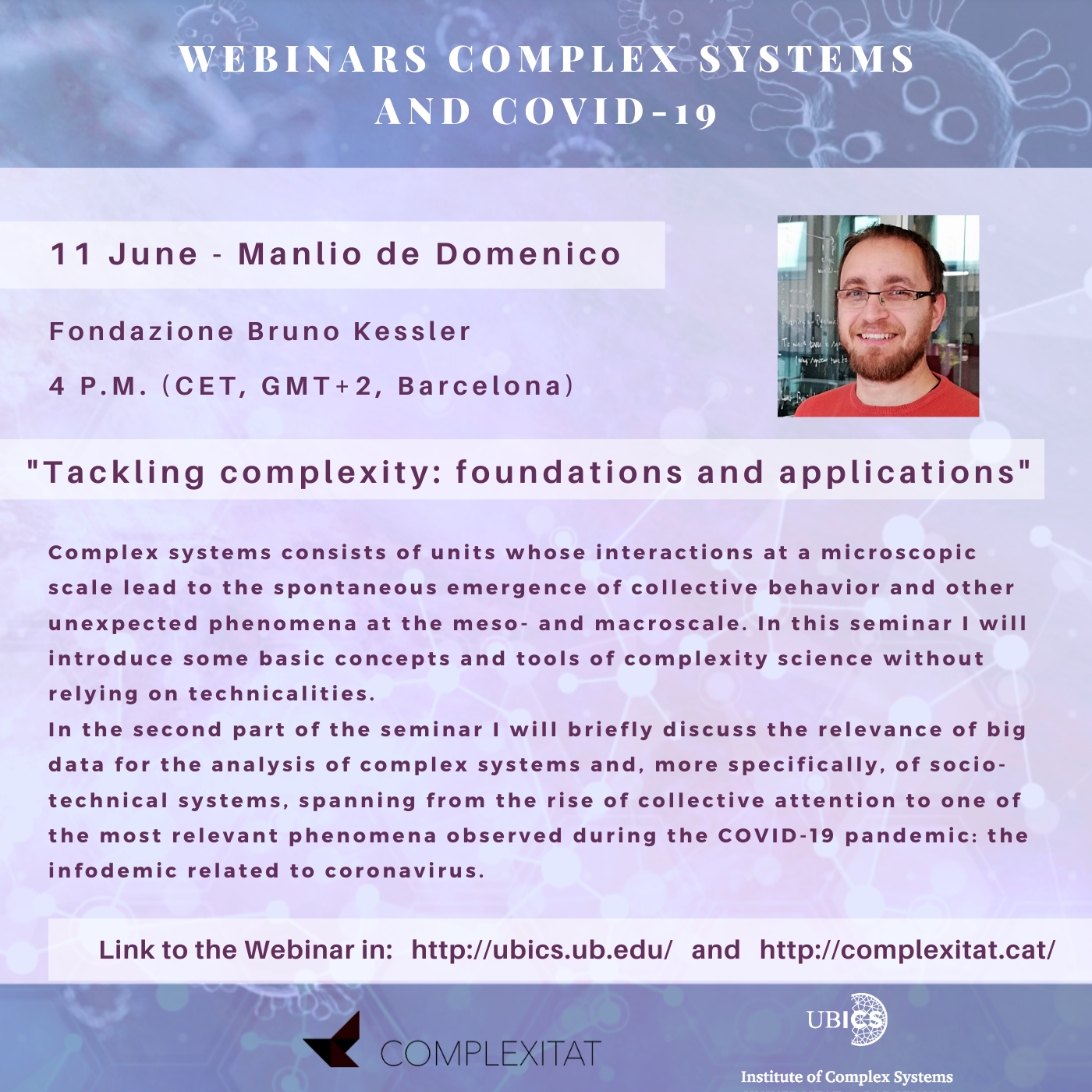 Complex systems consists of units whose interactions at a microscopic scale lead to the spontaneous emergence of collective behavior and other unexpected phenomena at the meso- and macroscale. In this seminar I will introduce some basic concepts and tools of complexity science without relying on technicalities.
In the second part of the seminar I will briefly discuss the relevance of big data for the analysis of complex systems and, more specifically, of socio-technical systems, spanning from the rise of collective attention to one of the most relevant phenomena observed during the COVID-19 pandemic: the infodemic related to coronavirus. 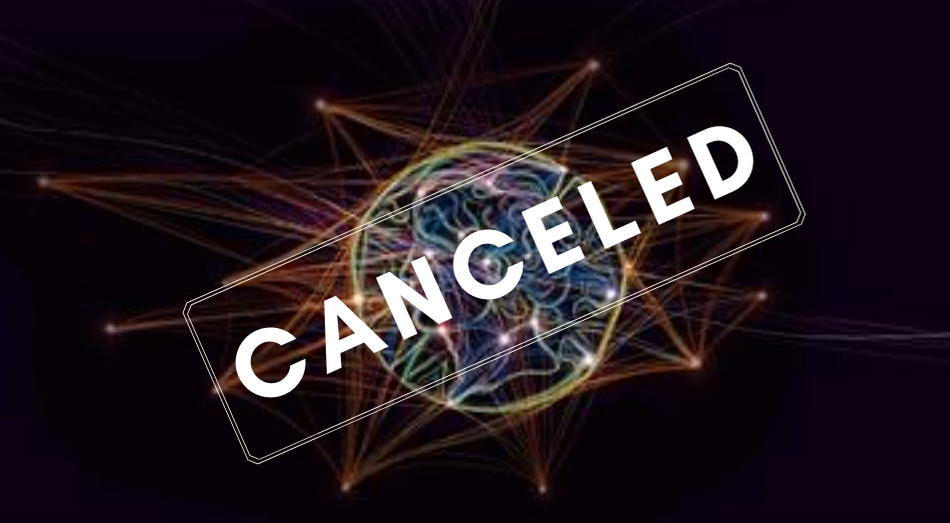 Due to travel cancellations of invited international speakers.

Andres Kimber (Institute of History and Archaeology, University of Tartu)

About complexity science and social systems

How can complexity science help us better understand past and present complex social systems as diverse as online social networks or the Roman economy? This half-day workshop will explore the role complexity science, and in particular its use of network approaches, can play for the study of the human present and past.

Complexity science is now a thriving field and its application for the study of the human past shows huge potential. This workshop will explore this potential. 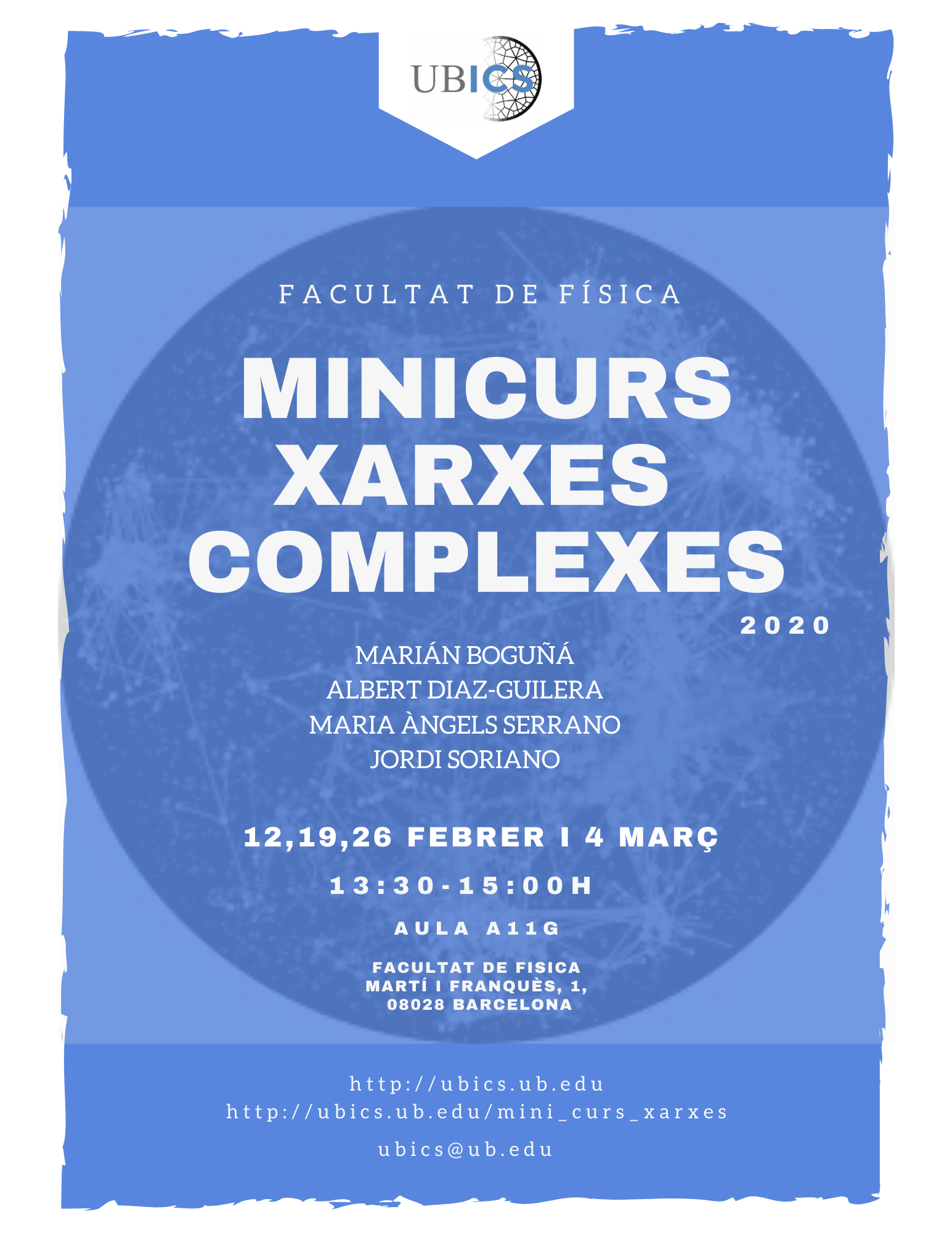 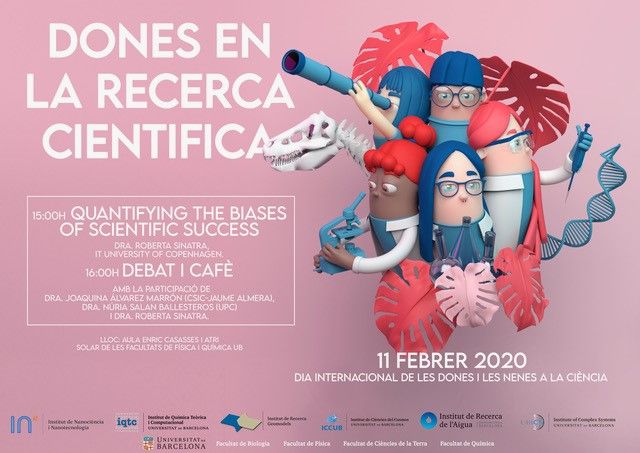 Abstract: Performance, also referred to as quality of fitness, represents the objective achievements of an individual, like the winning record of an athlete or the body of work of a scientist. In contrast, success, also referred to as impact, popularity, or visibility, is a collective phenomenon, indicating a community’s reaction to an individual’s performance. Why is the difference between performance and success important? Because in many areas of human activity, we often rely on success to measure performance - especially in science, where citations and visibility are constantly used to gauge quality, to assign recognition, and to allocate resources. Yet, success is strongly susceptible to effects that have NOTHING to do with performance, like gender or reputation. In this talk, we study success and impact in science, and ask: What is the role of luck in achieving high impact? What is the effect of gender and reputation on success? Can we model the different career evolution of male and female scientists? Based on the premise that success is a collective phenomenon, we use the tools of network science, data science, and computational social science to provide quantitative answers to these questions.

Bio: Roberta Sinatra is Assistant Professor at IT University of Copenhagen, and holds visiting positions at ISI (Turin, Italy) and Complexity Science Hub (Vienna, Austria). Her research is at the forefront of network science, data science and computational social science. Currently, she spends particular attention on the analysis and modeling of dynamics that lead to the collective phenomenon of success, with focus on science and art, and on data-for-good applications. Roberta completed her undergraduate and graduate studies in Physics at the University of Catania, Italy, and was first a postdoctoral fellow, then a research faculty at the Center for Complex Network Research of Northeastern University (Boston MA, USA). Her research has been published in general audience journals such as Nature and Science, and has been featured in The New York Times, Forbes, The Economist, The Guardian, The Washington Post, among other major media outlets.

• "Xarxes complexes per a tothom" 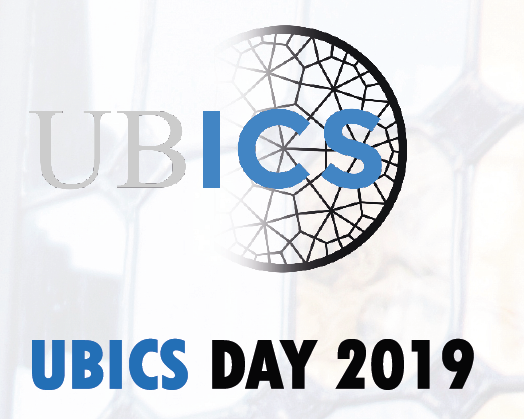 Register here for participating in the event

Abstracts of the talks can be downloaded here 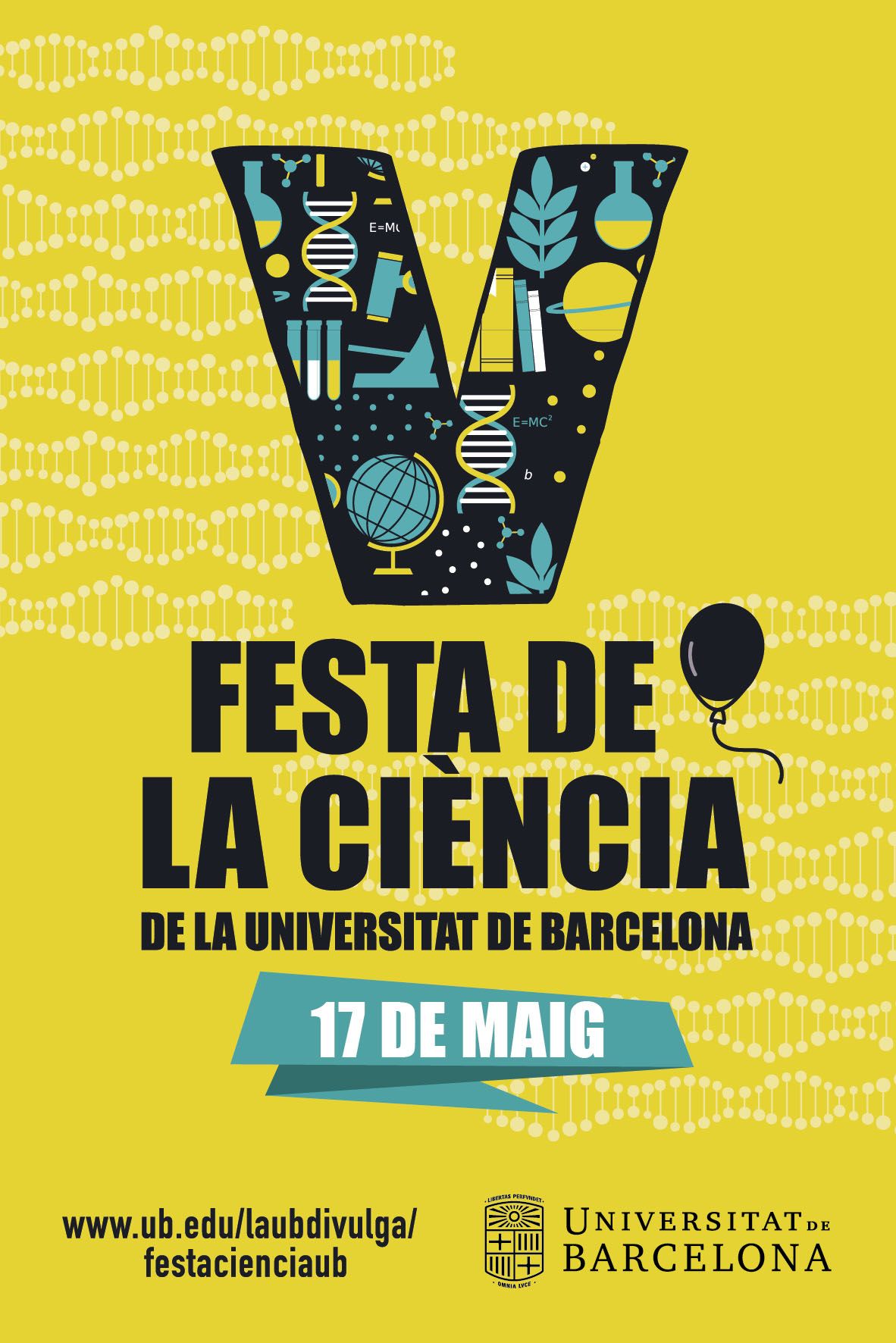 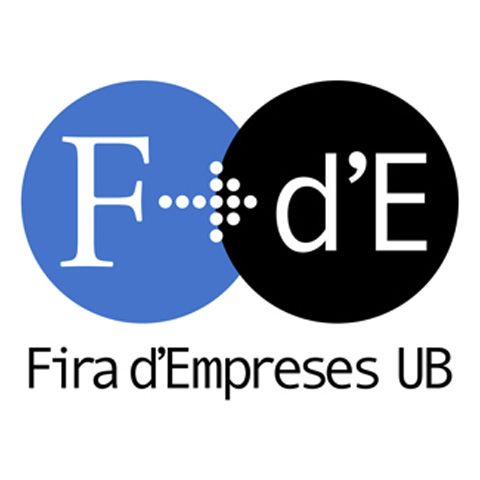